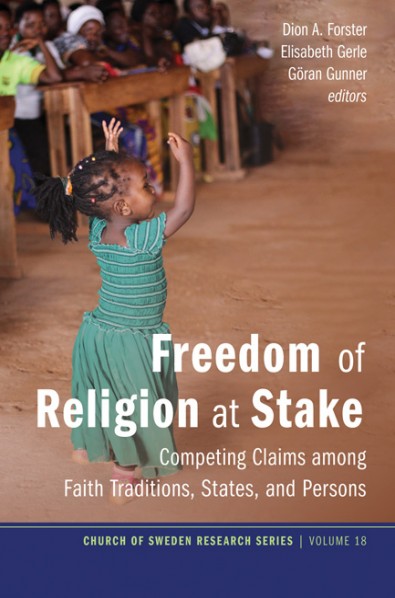 I write this review at a time of pandemic that has witnessed governments around the world impose restrictions on the movements and activities of people in order to slow down the devastating effects of Covid-19. Globally, individuals and communities have been faced with unprecedented confinement measures, which have included the restriction or prohibition of religious gatherings. While religious groups have largely accepted the necessity of these measures, we have also seen resistance from some who claim that government enforced restrictions, even in times of crisis, constitute violations against their right to freedom of religion. These oppositional responses have instigated broader and global debates about the relationships between states and religion. This has raised questions about how far governments can limit religious freedom in efforts to protect public health and concerns as to whether some states might use this opportunity to unfairly impose restrictions on marginalized or minority religious groups. The Covid-19 pandemic has again brought up for scrutiny urgent questions about the potential and limitations of religious freedom and emphasized the importance of scholarship in this area. Dion Forster, Elizabeth Gerle and Göran Gunner’s edited volume engages precisely what is “at stake” within these debates.

In the introduction of the book the editors acknowledge the complex terrain on which they tread and, therefore, make no attempt at defining or conceptualizing freedom of religion as a singular concept. Rather, the book aims to interrogate the ways in which freedom of religion is negotiated and conceptualized in Kenyan, South African and European contexts; in various relationships within and between heterogenous religious communities and individuals; as well as in relation to the state and society. The book offers a collection of fifteen essays organized into four political and social geographic contexts. The first part focuses on “different settings,” which include Sweden, South Africa and Europe broadly. The three parts that follow offer perspectives from Kenya, South Africa, and Europe respectively. Contextualizing the debate in this way offers readers the opportunity to compare the political, legal and social landscapes that frame the ways in which freedom of religion is debated, negotiated and problematized.

The book also offers multidisciplinary perspectives including theology, law, ethics, politics, and religious studies. This multi-disciplinarity is significant in so much as it resists the urge to provide easy solutions within singular aspects of the debate. Further, it allows the limits of certain arguments to be tested against various disciplinary positions. This is evident in the somewhat oppositional arguments offered by various authors. For example, in his chapter, Hennie Kotze, using the World’s Value Survey, offers a quantitative approach to measure and compare the “level of religiosity” between Sweden and South Africa. This chapter constructs a picture of a less developed, more culturally traditional and religious Africa and a more developed secularized Sweden. Elizabeth Gerle’s chapter, however, critiques the ways in which the World Values Survey reconstructs the problematic and oversimplified binary that places religion and tradition in opposition to the secular and rational. She argues that it is precisely the proliferation of this binary that has been instrumental in the construction of the non-Christian, non-secular religious Other in Europe. This, in turn, has fueled discourses that have equated freedom of religion with freedom from religion.

While the authors offer varied and sometimes competing conclusions, perhaps the most convincing arguments come from essays that critically engage power. These contributions engage deeply with the socio-political contexts within which they work and provide a strong theoretical critique of the relations of power implicated therein. While the scope of this review does not allow a detailed engagement with all the contributions in the book, I find that the essays on South Africa and Europe are particularly strong in this regard. Fatima Seedat and Charlene van der Walt, for example, provide an intersectional examination of power by pointing out the limitations of the state’s entanglement in religious freedom in South Africa for women and LGBT people. Nokuzola Mndende offers a strong critique of the power of the religious majority in South Africa by critiquing the ways in which Christianity has operated from a position of privilege in ways that continue to impede the religious freedom of those who adhere to African Traditional Religion. Elizabeth Gerle, in her chapter, critiques power as it is implicated in hegemonic ideologies in Europe that support conventional ideas of European individualism and secularism and African collectivism and religiosity. Yet, while the strengths of this book lie in its critique of particular relations of power, its neglect of others is also notable.

While power is examined in the book, the lens of power and privilege is also a helpful lens through which to critique some of the lacunas in the field that remain unaddressed. In addition, it is also worth noting that in some ways, the power that is implicated in debates about religious freedom seems to influence the very makeup of the book. For example, it is notable that contributions focusing on South Africa receive the most space and offer the most in-depth contextual engagement while only two essays are devoted to the Kenyan context. While the editors by no means make claims toward providing equal scope for different contexts, it is not only that more space is devoted to the context of South Africa but that more criticality is given to this context. It is notable that both Kenyan essays are written from a narrow Christian-centric perspective. Newton Maina’s essay for example explores the Kenyan governments regulation of religion in ways that lean towards justifying rather than problematizing the Kenyan governments regulation of certain religious groups as a response to Islamic terrorism. Damaris Paristau on the other hand explores how Pentecostalism is formed and transformed in rural Masaai cultures. Yet, instead of studying the Masaai culture in its own right, she does so through the lens of Christianity, often making troubling conclusions that construct Pentecostalism as the redeeming religion for ‘backward’ Masaai people. Thus, the myth that traditional African cultures and religions are backward, patriarchal and queerphobic is perpetuated. The examination of the Kenyan context in relation to the South African context in this book, reinscribes relations of power that produce narratives of South African exceptionalism in the context of Africa. Readers should therefore be prepared to engage these contexts with different depths and with a criticality of the nuances of power that continue to be overlooked in debates on religious freedom.

In addition, besides the chapters that speak to Sweden specifically, the European engagements tend to discuss freedom of religion in Europe at the level of legislative bodies and regional policies. While these contributions are critical and notable, the reader is left with a lack of interaction with the experiences and histories of religious communities and individuals in more localized contexts as is done within the South African context. Another notable exclusion in this book is a lack of engagement with New Religious Movements. When reference is made by authors to Christian New Religious Movements these are again analyzed through the lenses of Christian majority or mainline Christian theologies and constructed in oversimplified and often derogatory ways that reify rather than disrupt the power that majority religious groups and ideologies have to frame debates about freedom of religion.

This volume provides a timely and welcome engagement with an area of research that is increasingly topical and open to debate. While the book could perhaps have benefited from a more nuanced engagement with Christonormativity, it does provide a much-needed contribution to understanding the complexities of freedom of religion in different contexts. I would recommend this book to scholars working in the fields of theology or religion and who, in light of the continually changing landscapes in which religious freedom is implicated, find themselves driven to explore more deeply how their work may nuance understandings of what is at stake.

By Megan Robertson
University of the Western Cape