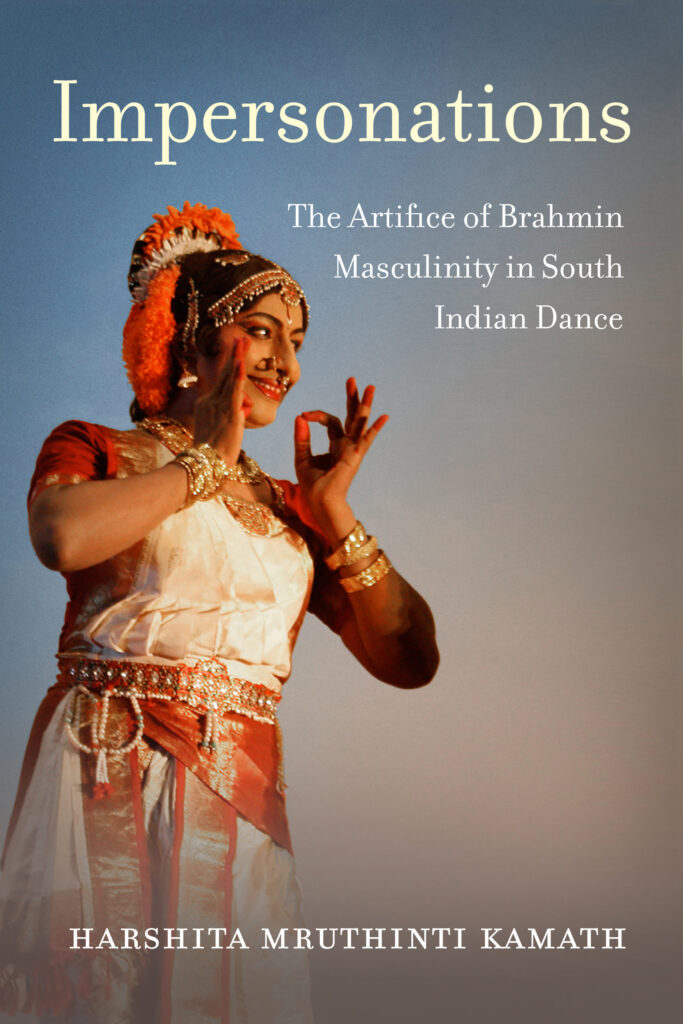 Kamath’s book is an ethnographic study of the practice of gendered guising in the Kuchipudi dance tradition of South India. Kuchipudi is both a dance tradition that was classicized in the early 20th century, and a village in Krishna district in the state of Andhra Pradesh. This monograph begins in the village where the famous dance form is said to have originated and moves to urban and transnational spaces where Kuchipudi is performed today. In this process, Kamath analyzes the male brahmin practice of stri vesam (male dancers taking on the guise of a female character) and shows the ways in which this practice provides brahmin men with hegemonic authority in the world of Kuchipudi. She also explores how that masculinity is impacted by Kuchipudi’s movement into transnational and urban spaces.

Kamath emphasizes the importance of the practice of impersonation in Kuchipudi, the village, and how it is a turning point in the lives of male dancers; in the words of one of her interlocutors: “Every man born in Kuchipudi must wear Satyabhama’s vesam at least once in his life” (51). Contextualizing this practice in the overarching study of masculinity in India, Kamath points out the irony of a largely heteronormative and patriarchal society participating in gender fluidity in order to assert their caste and gender identities. Moreover, as Kamath takes the reader outside of the village, she examines the way that this practice is rejected and circumscribed in urban and transnational Kuchipudi performances, where the majority of dancers are female. Studying a dance tradition that is increasingly popular, especially in the South Asian diaspora, this book makes key contributions to the fields of South Asia studies, masculinity studies, dance historiography, and gender theory.

In the introductory chapter of her book, Kamath introduces the reader to the patriarchs of the village, men who shaped how Kuchipudi is known in the modern world. These men are widely known for their practice of impersonation, in which they take on the guise of Satyabhama, the mythological wife of Krishna, in a well-known dance drama called Bhamakalapam. Their act of female guising (stri vesam) is not just superficial: in addition to makeup and sartorial changes, these men also make affective changes to behave “like a woman”, though Kamath points out that this femininity is always idealized through a male gaze. The rest of the chapter is dedicated to introducing the reader to the village of Kuchipudi, its caste and gender norms, and the author’s methodological approach and her positionality in relation to the ethnography as a Kuchipudi dancer herself and a brahmin. Kamath’s ethnographic research methodology includes her participation in dance. A trained Kuchipudi dancer, she places herself in the classrooms of her 2 interlocutors not only to establish contacts, but also to learn the ways the dancing body carries knowledge and to cultivate “kinesthetic empathy.” This methodological approach stands out in this monograph.

Kamath briefly explains how the 20th century Anti-Nautch movement marginalized the devadasi, a broad category of women who could be temple dancers or courtesans. Devadasi dance traditions were appropriated by revivalists, like Rukmini Arundale, who then “reformed” (sanitized) the dance forms and taught them to upper-caste and upper-class women. She also examines the hagiographies of Siddhendra, the legendary founder of Kuchipudi, whose originary act of guising as Satyabhama set the standard for all brahmin male dancers to follow. Kamath argues that Siddhendra’s existing hagiographies, which frame him as an ideal poet-saint, are a 20th century construction that contribute to the classicization of the dance form. This process of classicization placed the brahmin male at the center of the Kuchipudi stage.

In the next chapter, Kamath explores how the brahmin male transforms into Satyabhama, the lover/ wife of Krishna. This process utilizes three different modifications (abhinaya): clothes (aharya), voice modulating (vacaka), and bodily movement (angika). All three of these modifications contribute to the local hegemonic masculinity that Kamath argues culminates in the performances of Satyanarayana Sarma, who is considered the best impersonator of Satyabhama. Through Kamath’s ethnographic vignette, Sarma comes across as an authoritative brahmin who effortlessly transforms into and passes as a woman. Sarma’s accounts of his own life story also heighten his own story to a “performative hagiography” (72). Younger male brahmin performers aspire to achieve this hegemonic masculinity that ultimately, she argues, never actualizes for multiple reasons. Primarily, it is because he trained very few students and was very secretive about his technique; it was also because it sets up an expectation in the audience that is impossible for the dancer to meet.

In the next chapter, Kamath explores how this process of impersonation is different between the characters of Satyabhama and Madhavi, the female confidant of Satyabhama. In performances of Bhama Kalapam, the character of Madhavi, Madhava (Krishna’s brahmin confidant), and the director (Sutradhara) is played by the same male actor. Through a performance analysis of the Bhama Kalapam, Kamath shows how the single actor shifts between genders (through apostrophes addressed to members in the audience or orchestra and not, as one might expect, through sartorial changes) and then contextualizes this gender fluidity within her interlocutors’ theory of maya (illusion, artifice). This is where the heart of Kamath’s argument lies: she examines how speech and parody facilitate the actor in moving between genders. Drawing on Butler and other theorists of gender, she argues that this process of guising destabilizes both the female character being impersonated and the brahmin masculinity being parodied, as with just a few uttered words, Madhavi can become the Sutradhara, or Madhava alternatively.

Having analyzed impersonation in the village/traditional context of Kuchipudi dance, in the next chapter, Kamath explores how the practice changes in the urban and transnational context. She analyzes two specific performances directed by Vempati Chinna Satyam, the dancer from Kuchipudi who was responsible for bringing the dance form to the urban and transnational communities. In these performances, where female dancers are available to play female characters, Kamath interrogates the meaning of guising when a man plays a gender variant role like Madhavi (Madhava/Sutradhara). She argues that where brahmin male instances of impersonation in the village reinforce hegemonic brahmin masculinity, when it is performed outside the village, where there are a surplus of female dancers available (and indeed, one of those female dancers portrays Satyabhama, unlike in the village), Chinna Satyam’s Madhavi parodies the heroine (Satyabhama) and her femininity. This version of Madhavi is the “queer foil” to Satyabhama; Chinna Satyam’s portrayal, Kamath argues, is an “inauthentic imitation” of the brahmin masculinity. Kamath argues that the hegemonic brahmin masculinity is destabilized by the non-village performances. These gender bending performances and impersonations, Kamath argues, reveal the inherent instability of gender, caste, and sexuality (133).

Kamath concludes this book by relating the stories of the women who are related to the traditional brahmin dancers from Kuchipudi who were never allowed to dance themselves. This chapter focuses especially on Baliakka, the daughter of Vempati Chinna Satyam, who, following his death, took on much of the weight of keeping the traditional dance form alive. Kamath explores Baliakka’s transformed relationship to Kuchipudi after spending most of her life being denied the art by her father when she was young and learning it only secretly by observing her father teaching his other students. Baliakka, despite being denied the art form for most of her life, still credits her father and other Kuchipudi male dancers as its true custodians.

Kamath’s argument, based on dance historiography and performance studies, is that brahmin masculinity in the village of Kuchipudi is both created by and helps to establish the norms of the dance form and the practice of impersonation. However, in urban and transnational contexts this brahmin practice is rendered obsolete by the presence of female dancers, and this, in turn, reveals the fragility of brahmin masculinity. It also opens up the possibility for a queer reading when the author examines the impact of impersonation and parody when performed by a masculine dancer of a female character outside of the context of the traditional village performance. The only possible shortcoming to this argument is that it is based on only a few performances. Additionally, interviews with the audiences, and how they relate to the performed piece, would further enhance this analysis of gender impersonation.

Through this ethnography of the practice of female impersonation, Kamath explores both how brahmin masculinity is constructed, and how it is broken down through various performances outside the village. It makes a considerable contribution to the study of masculinity in dance historiography and queer theory in South Asia.