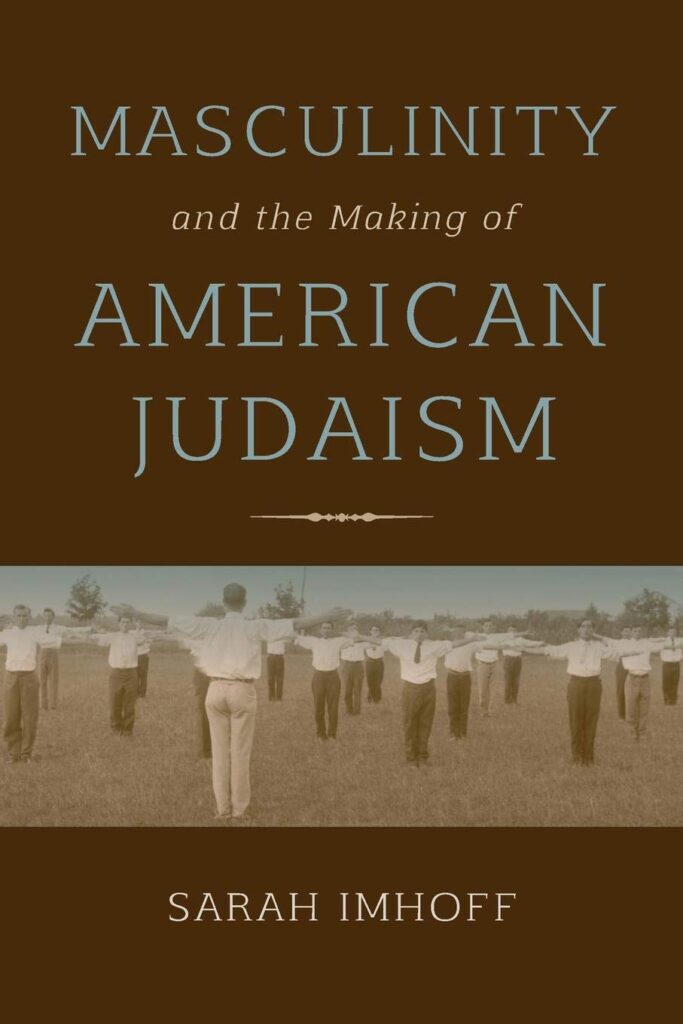 Sarah Imhoff’s new book Masculinity and the Making of American Judaism seeks to fill a lacuna in both masculinity studies and Jewish studies by addressing a relatively unexplored intersection between the two disciplines. Imhoff approaches her research question from a historical viewpoint considering the gendered experience of “acculturated” Jews, a term she uses to denote a segment of American Jewry between 1900-1924 that were mostly Reform and civically engaged. She chose this time period because it marked a shift in the dynamics of the Jewish community.  New waves of poor Eastern European Jewish immigrants arriving in America clashed with the established Jewish community, which was comprised mostly of assimilated, successful German Jews. She argues that this moment at the turn of the century was a crucial turning point in how American Jews thought about what it meant to be American and Jewish.

Imhoff’s thesis is simple and straight to the point. She argues that the Jewish religion shaped American Jewish masculinity in the early twentieth century and the force of discourses of masculinity shaped American Judaism. In addition, she suggests a two-part claim in which acculturated American Jews championed a masculinity of self-sufficiency, courage and physical health, but downplayed strength, aggression and domination. These American Jews argued that Judaism was an American religion, i.e. a “good” religion, because of its masculine virtues of rationalism and universalism. Imhoff’s book explores these claims through three themes—the land and healthy body, notions of normal/abnormal in relation to crime, and the hegemony of Christianity. Throughout the work she makes the important argument that gender and religion are co-constitutive by looking at Judaism and notions of masculinity in tandem in a variety of contexts.

Part One, called An American Religion, unpacks the deeply conciliatory impulse found in Jewish Theology of this era. Acculturated, American Rabbis sought to emphasize the rational and universal qualities of Judaism thereby rendering it a “good” religion in accordance with Protestant norms. The second chapter in this section considers the experience of Hebrew-Christians, Jewish Christian converts who occupied a liminal space between the two religions. Both Christians and Hebrew-Christians considered Jewish men as having a different type of masculinity than Christians, one characterized as gentler and quieter in suffering, yet not portrayed as negative or effeminate.

Part Two focuses on the notion of a healthy body and its connection with the land. Here Imhoff investigates the nuanced relationships acculturated Jews had with the American West in the Galveston Movement and in Indian (Native American)-Israelite relations. In this section she also covers a failed attempt at a Jewish farming community called the Woodbine settlement in an effort to unpack the place of labor and the land in an aspirational American Jewish identity. She then connects this to the distinctions between European Zionism, which cast the exilic Jew as emasculated, and American Zionism, which downplayed Zionism’s implications of a muscular, strong male body instead focusing on male courage and political heroism.

The third and final part of the book is about the abnormal and the criminal. Imhoff choses this area of research because she claims crime lies outside of social norms and therefore can reveal its boundaries. Her three case studies include an article by NYC police commissioner Theodore Bingham suggesting that more than half the criminals in New York in 1908 were Jewish, the Leo Frank murder trial, and the Leopold and Loeb Chicago Hearing. Each case reveals the assumptions of the public regarding Jewish men criminals as nonviolent and sexually impotent, which was used either as a case for their innocence or to denounce them as socially or sexually deviant.

As Imhoff’s diverse and unrelated areas of research suggest, she makes a methodological move to “look at the margins” of Jewish history in this period to learn something about the cultural “center.” She cites Foucault’s use of prisons and Judith Butler’s use of drag queens as examples of this mode of scholarship.[1] However, these scholars look at a marginal area that directly speaks to the theoretical place they want to study- power or gender.  Imhoff provides a number of examples of how to rethink Jewish masculinity, but her work on the margins does not culminate in a strong theoretical contribution to theories of masculinity. Citing different historical moments where masculinity differed from its conventional definition provides evidence that masculinity is not monolithic, but this work is missing the tools to say something more theoretical about what this means for masculinity studies in general.  Something Imhoff does succeed in doing is making a theoretical intervention in the study of Jewish History by challenging a notion in this discipline that conventionally assumes that Jews are forever reacting to non-Jewish norms. Imhoff rejects this dichotomy, by including Hebrew-Christian for example, while still allowing for a difference between Jews and non-Jews. In addition, she is careful to avoid cementing an essential notion of Jewishness or a singular Jewish experience.

The book is useful for those with a specific interest in Jewish thought and culture at the turn of the twentieth century. However, Imhoff’s decision to focus on three unrelated areas and cursory use of different historical events make for a somewhat disjointed argument and a limited audience. Her theoretical claims about masculinity are not well-defined enough to transcend her provincial examples. Each chapter ends with multiple conclusions that she attempts to squeeze into an overall claim. For example, Part One of the book considers Jewish-Christian relations focusing on how Judaism was affected by the Christian notion of what a “good” religion looked like; however, this part of the book also tries to make a number of other claims about conversion, Jewish Theology and a critique of the “feminized” Jew.  It is not clear how all of these disjointed pieces fit together.  On the other hand, this allows for each chapter to stand on its own and therefore would be helpful for a reader or scholar with an interest in that particular topic, such as Jewish converts or American Zionism.

Imhoff mentions in her introduction that research on Jewish Masculinity would benefit from the use of ethnographic methods. In fact, an ethnography of Jewish men and their relationship with masculinity would perhaps offer a more concrete and compelling look at the lived experience of Jewish men in a particular community. Imhoff’s book could lay the foundation for understanding the historical context of contemporary American Jewish men if this work is taken up by scholars in the future. Imhoff also limits her research to non-Orthodox men, so there is a need for work to be done on masculinity among Orthodox and Hasidic men. Men in Judaism have been the unmarked category for most of Jewish history so it is an important corrective to interrogate the ways in which their gender is indeed an influential aspect of their Jewish identity. Often feminist scholars in Jewish studies gravitate towards studies of Jewish women; however, in order to fully grasp the role of gender in the Jewish community discourses of masculinity must also be considered. Sarah Imhoff’s book is a contribution to this project by capturing the variety of approaches to masculinity among American Jews at the turn of the century.

By Chava Green
Chava Green is a PhD student in Religion at Emory University.