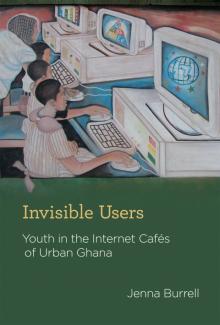 Invisible Users: Youth in the Internet Cafés of Urban Ghana is ethnographer Jenna Burrell’s contribution to the Acting with Technology series published by MIT Press and edited by Bonnie Nardi, Victor Kaptelinin, and Kirsten Foot. In it, Burrell explores “the interpretive flexibility of technology, that the meanings and uses of a machine or system are not predetermined by the form alone but come to be understood in distinctive ways by different user populations and other relevant groups” (6). Burrell enriches the research literature on human-computer interaction by situating her investigation in a community that functions very effectively as a proxy for any group whose existence is lived out in the social, economic, and political peripheries of the global stage. The urban youth of Accra, Ghana are definitely not the product users that designers, developers, and manufacturers of digital technology have in mind when products are developed and marketed. In this way the youth are “invisible users” of digital technology. In their role as invisible users, Burrell explores the many accommodations required of Ghanaian Internet users as they struggle to interact with a technology that often treats them as unwanted intruders.

Burrell proposes a three-ring spiral framework from which to examine the social world of the digital technology users in Ghana. The three sections of the spiral are each investigated in two chapters of the book. At the center of the spiral is the human-machine interface (Chapters 2 and 3). Burrell found that youth in the Internet cafés often seem to be seeking a respite from the close monitoring their behavior attracts outside the cafés. The youth also seek to create and strengthen social bonds both with peers in the Internet cafés and the individuals and companies they interact with online. Connections formed online with foreign individuals and companies are especially prized because of the limited ability most Ghanaians have to travel. The youth vigorously pursued Internet activities that produced tokens of connections with foreign lands. As Burrell notes, “the Internet provided opportunities for making faraway places very tangible and personal—marked with the most intimate of labels, one’s name” (45). The Internet users in the cafés sought to create “a cosmopolitan self through electronic travels” (53).

In Chapter 3, Burrell examines the nature of the cross-cultural digital experiences between Ghanaian youth and foreigners. With great effectiveness, she incorporates real-life examples of difficulties encountered by Ghanaians in their communications with foreigners. The difficulties serve to humanize and illuminate Burrell’s opposition to scholarship where “the virtual has often been analyzed as a domain of less material interactions in comparison to the ‘real’ world” (56). The great lengths many Ghanaians feel compelled to go through to hide their true selves in order to establish and maintain relationships with foreigners online indicate that the ability of the user “to shed bodily form and to represent the self purely through text” is not part of the current reality in cyberspace (78).

The second ring of Burrell’s spiral framework deepens the investigation of human-machine interface discussed in Chapters 2 and 3 by incorporating a second level of analysis “carried out in spaces of second-order sense-making” (21). In Chapter 4, Burrell investigates the influential role of rumors in how young Ghanaians form their understanding of how to interact with digital technologies. It appears that the dearth of quality information regarding the effective use of the Internet creates voids that Ghanaian youth attempt to fill with information provided through rumor. Digital technologies provide the means by which rumors can be quickly spread to an ever increasing number of recipients. Because rumors possess the ability to affect the behavior of Ghanaian youth, Burrell wisely incorporates them into her study “treated not as false and fantastical tales but as convincing and durable speech acts that had consequences for how the Internet ultimately came to be materialized in Accra” (82). Burrell concludes that the intensity of rumors celebrating financial windfalls gained from foreigners online “reinforced a persistent, go-for-broke approach to building a social network online and the enrollment of foreign contacts among young Ghanaian users” (104).

Spirituality occupies a prominent place in the lives of Ghanaians. Contemporary Ghanaian spirituality is complicated due to several expressions of spirituality coexisting. In Chapter 5, Burrell notes that modern urban Ghanaians feel an expectation to present themselves in public as either a Christian or a Muslim. However, “private behavior indicated a continuing belief in the efficacy and importance as outlined by indigenous cosmologies that predate these world religions and more generally a widespread interest in employing religious practices for tangible solutions to worldly problems” (129). The Ghanaian practice of integrating religious practices into their Internet experiences supports Burrell’s position that “the Internet café cannot be sufficiently understood by studying it as a bounded space” (130).

Chapters 6 and 7 are devoted to the political economy, the third and final ring of Burrell’s spiral framework. In these chapters, Burrell explores the role of global economic influences on the development of digital technologies in Ghana and how the ever-increasing number of computers impacts Ghanaians both inside and outside of the Internet cafés. Ghana finds itself the recipient of ever-increasing amounts of outdated electronic castoffs, fueled by tax benefits enjoyed by the donor organizations and a zero percent import duty placed on computers by the Ghanaian government.

In 2005, the United Nations sponsored a World Summit on the Information Society in Accra, and Burrell was able to experience firsthand the disconnect that exists between the elite agencies participating in the summit and the typical Ghanaian sellers and users of technology. Summit organizers claimed inclusiveness was a goal of the conference; however, Burrell found little evidence to support the purported goal. Many of the grassroots organizations that hoped to add their voice to the summit’s program found their ability to participate restricted by both physical and financial considerations. Also, the desire of summit organizers to arrive at a unified message in order to have the ability to direct future global technology policy discouraged the inclusion of divergent views of technology.

Burrell’s account of urban youth in the Internet cafés of Accra, Ghana calls into question how successfully the Internet has operated as a “liberator” for any marginalized population. Digital technologies have often been “linked with certain social ideals—equality, openness, and freedom” (183). In this well-written and compelling book, Burrell deftly supports her conviction that future scholarship must recognize the inconsistencies inherent in the digital experiences of those who live in the margins of our global society.