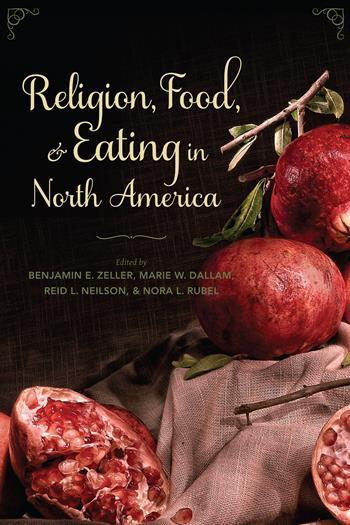 Food is inextricable from religion. Despite this fact, relatively little scholarship exists on religious food practices beyond descriptions of well-known food rituals and restrictions. In Religion, Food, & Eating in North America, editors Benjamin E. Zeller, Marie W. Dallam, Reid L. Neilson, and Nora L. Rubel present fifteen diverse essays utilizing a myriad of methodologies in order to bring the study of religious foodways in North America to life. “Foodways,” a term borrowed from food studies, is used throughout the book to describe beliefs and practices related to food and eating. The essays in this volume demonstrate that foodways often reflect religious ideas and their study of these foodways provides a window into religion as it is lived and practiced.

The collected essays examine food practices in a range of religious traditions. Marie W. Dallam sets out the volume’s ambitious agenda through an informative introduction that succeeds in asserting a place for the study of religious foodways in both religious studies and food studies. The rather slim volume that follows boils over with chapters focusing on the foodways of Christians, Jews, Buddhists, Muslims, practitioners of Afro-Caribbean religions, new religious movements, and people who consider food to be their religion. Four themes serve to frame the varied practices in a coherent conversation about the nature of religious foodways: theological foodways, identity foodways, negotiated foodways and activist foodways. The boundaries between these four sections are porous and the themes flow throughout the book and comingle in many essays. Discussion questions follow each essay, which make this volume an excellent tool for classroom use and the extensive bibliography on religion and food provides resources for studying religious foodways in various areas and ways. An overarching attention to the embedded nature of food practices in religious communities makes this book an essential resource for scholars of religion in North America and beyond.

The first section on theological foodways is the most cohesive and provides the best example of the breadth of available material for the study of religious foodways. All four essays in this section describe the theological bedrock of various Christian vegetarian movements. Despite sharing a broad topical heading, the four essays utilize different methodologies and overlap surprisingly little. Essays by David Grumett and Jeremy Rapport describe the theologies of nineteenth century health reformers, such as William Metcalfe, Sylvester Graham, Ellen G. White, and Charles and Myrtle Fillmore. These essays provide a solid historical background for two twentieth century examples provided by Leonard Primiano and Annie Blazer, who discuss the theological foodways of Father Divine’s International Peace Mission Movement and Hallelujah Acres. These four essays highlight the future work that can be done in Christian vegetarianism and simultaneously point to the need for a study of Christian and non-Christian theological foodways.

The second section on identity foodways provides four essays that examine how food practices help to shape personal and group religious identities. All four essays focus on food, religion and identity formation in minority groups in North America. Two of the essays bring forward particularly fascinating examples of how religious identities can be expressed through foodways. Suzanne Crawford O’Brien’s essay provides an excellent study of the First Salmon Ceremonies of the Coast Salish people and the ecological, ethical and spiritual issues involved in continuation of this traditional practice. Samira K. Mehta uses holiday celebrations to call attention to the ways that interfaith identities are worked out in America through both the maintenance and innovation of religious and cultural food practices.

The section on negotiated foodways is less cohesive, but it provides an impressively diverse array of subjects. The essays are loosely tied together by a focus on how food is used by religious communities to assert themselves as outsiders and the alteration of religious practices in new environments. The standout here is a chapter by Nora L. Rubel that lays out a compelling argument for negotiation of Judaism in an American context through the relatively recent invention of a Break Fast that offers Jews who do not observe Sukkot an opportunity to feast after the Yom Kippur fast. The other essays in this section include interesting examples of negotiation but the theme of identity is still strong in this section. For example, Kate Holbrook argues that the Nation of Islam and The Church of Jesus Christ of Latter-day Saints appeared to incorporate American values into their outsider foodways, but in doing so she also discusses how the foodways of these groups helped separate their members from the American population and build a communal identity. The essays in this section reveal that the division between negotiated foodways and identity foodways is particularly indistinct.

The last section contains three essays that deal with activist foodways, looking at the religious foodways that seek to the health of communities, fellow creatures, and the world. The first two essays in the section offer examples of Christian and Muslim food-based activism but the third essay provides an alternative approach. Benjamin E. Zeller asserts that some activist foodways are “quasi-religious.” He suggests that for many, foodways like vegetarianism and locavorism exhibit religious qualities such as rituals, conversions, and central texts. Zeller’s essay is persuasive and forces the reader to take into account the possible contribution of religious studies to food studies.

This bold volume aspires to start a conversation about foodways in religious studies and it delivers. The volume covers a lot of ground and the editors acknowledge that it is only the beginning. It offers an opportunity for religious studies scholars to consider foodways as a useful mode of inquiry and highlights some of the areas where more work can and should be done. For example, the essays included focus mainly on Christian and Jewish foodways, and the editors acknowledge that there is much work to be done in religious foodways to broaden the field.  In addition, although the volume’s focus on foodways is impressive, it has failed to adequately deal with the material nature of food. Food floats throughout the volume but readers are rarely treated to descriptions of what it looks, feels, tastes, smells or sounds like. Brief hints at food production and processing highlight the need for a further study of religious interactions with food before, and even after, it is eaten. The fact that this volume illuminates so many areas for future inquiry demonstrates the valuable contribution it provides to the study of religion in North America. We are given a taste of the potential of the study of religious foodways. Now we as scholars just have to join in and feast.