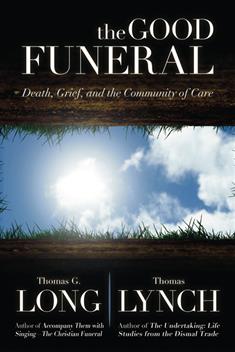 In their extraordinary collaborative effort to “redeem the funeral” from its “failed and falling ways” (28), acclaimed funeral experts Thomas G. Long, a preaching professor, and Thomas Lynch, a funeral director, call upon their professional peers to repent from aiding and abetting the metastasizing plague of vapid “celebrations of life,” memorial services, and other tame tributes to the dead. This lively conversation—neatly threaded with the common refrain that a good funeral is one that gets the dead where they need to go, and the living where they need to be—epitomizes how an interdisciplinary work can offer constructive criticism and renewed vision for practices crucial for human flourishing, and, particularly, for thriving Christian congregations.

As clergy and funeral directors hold these authors’ claims up to their own experience, they will find themselves not only enlightened and emboldened, but also upbraided and rebuked. We have become “our own worst enemies” (113 ff.). For while funeral directors have often stood between the dead and their mourners, peddling the nonessentials of “sealed” coffins and prepaid funeral plans, preachers let themselves be blown about by every wind and doctrine, acting as “spiritual but not religious” gurus or affable chatterers quick to stuff raw human emotion into neat compartments. Eschewing the title of “funeral director,” Lynch scolds his peers for their thoughtless trading of “a serviceable and quietly sublime occupational title—undertaker—for a contrivance” (114). Undertakers do not exist to profit from death, but “to serve the living by caring for the dead” (ibid.) Pastors are also undertakers, Long claims, for they serve not to make the funeral sacred, but as midwives who undertake the task of magnifying the sacredness already present in the funeral drama (174).

Long and Lynch’s most riveting passages attend to the significance of human bodies. As the authors alternate chapters, the most persistent theme is their mutual insistence that one of the most essential, definitive elements of a funeral is the presence of the dead (79). Those familiar with Lynch’s earlier critique of “bodiless obsequies”[1] will appreciate his eloquent articulation of the importance of the corpse’s presence for coping with grief. In one gripping passage, Lynch writes of a man who thanked him for suggesting he build a coffin for his terminally ill, infant grandson (143-44). Elsewhere, Lynch describes witnessing how comforting it was for the families of those killed on September 11th to recover even “a portion of a portion of a body part” pulled from the rubble. He piercingly concludes, “Only people with options can opt not to deal with the bodies of the dead” (78).

Long claims our culture “has forgotten what to do with the dead and persuaded itself that this amnesia is a sign of health and freedom” (105). People are “as religious as they have ever been, but they have switched religions to one with more vapor and less body” (104). The origins of such Docetism are theological. “Preachers and believers forgot the power of their own theological poetry” (ibid.). We have become so disenchanted by “wooden literalisms” and “scientific rationality” that we cannot help but think a dead body is nothing more than a shell with nowhere to go. With help from Augustine, Long rightly concludes that we should emulate the way Jesus’ followers handled his body from the cross to the tomb, “not because bodies have feelings but because they were acting out in their human care what they believed God was doing, divinely caring for Jesus’ body as God cares for the bodies of all the dead” (109).

Both Long and Lynch contend with the funereal fallout from Jessica Mitford’s The American Way of Death, which did to funeral directors what Sinclair Lewis’s Elmer Gantry did to preachers. By uncritically accepting her clever lampoons, we—especially white Protestant—Americans have begun prizing in funerals the same things we have in fast food:  convenience and cost efficiency (74). We are becoming ignorant of the truths to which our own language points us. As Lynch writes, “The same lexicon that placeshuman proximate to humus and humic does likewise with grave and gravid, gravitas, and gravity” (76). Long claims that “we are rapidly becoming the first society in the history of the world for whom the dead are no longer required—or desired—at their own funerals” (93).

Some of Long and Lynch’s most practical conclusions come in the last few chapters, where both authors bring their argument to bear specifically on the nature of grief. Particularly useful is Long’s enumeration of the implicit meanings of a funeral’s choreography (210 ff.) For example, the processional of the body into and out of the service “tells an enacted story about life, death, and hope” (212). The way we meet the body, carry it, place it, and accompany it to its the final resting place is crucial for fulfilling the narrative shape of the funeral drama, and for meeting the deepest needs of those who are grieving. Such movement is a confession of faith in enacted form (214). Lynch also elegantly insists on this narrative shape: “By acting out our ancient obligations to the dead we get to the edge of the life we will be living without them, consoled by the promises we claim in faith, happily haunted by our dreams and memories of those gone before us” (233).

It is noteworthy that throughout the book both authors seem to be maneuvering around the word “resurrection.” Perhaps the term was left behind in their generous attempt to appeal to a wide audience. Proclamation of the resurrection, however, is entirely absent from Lynch’s four “essential, definitive elements of a funeral” (79-81). And Long seems to replace “resurrection” with “hope” at times, so that the liturgical movement traces the contours of “life, death, and hope” (212, emphasis mine). With all the talk about the necessity of bringing bodies back to their own funerals, I wonder what both authors might have done with a thicker description of the significance of Jesus’ resurrected body.

On the other hand, the book was strangely enjoyable to read, despite its morose subject matter. Two of the most trusted names in their respective professions share the wisdom of their tandem journey in hope that they might draw clergy and funeral directors back down to earth. Reading Long and Lynch was like listening to two jazz artists harmonizing the solos they’d previously been practicing on their own.

Indeed, this indispensible book is accessible to clergy and layperson alike despite its foreboding front cover, which puts the reader in the unenviable position of looking up into the sky from the bottom of a freshly dug grave. Noticeably absent at the grave’s edges are mourners; an absence the book will surely convince you is a problem.

I commend this work to clergy, funeral directors, and all those who feel as if they cannot quite put their finger on what’s missing at contemporary funerals. Long and Lynch’s claims are well-suited to guide discussions that link funerals with theological, ecclesiological, and pastoral concerns, whether in small group settings, at conferences of funeral directors, or among clergy, to name a few possibilities.

By Mack Dennis
Mack Dennis is a doctoral student in Homiletics at Duke Divinity School.