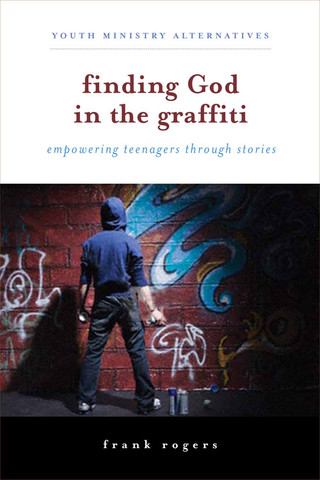 The fourth title in the Youth Ministry Alternatives series from Pilgrim Press, this new book from Frank Rogers, Jr., professor of Spiritual Formation and Narrative Pedagogy at Claremont School of Theology, argues convincingly for the need to apply the power of narrative to engage adolescents and young adults in creatively imagining and encountering the transformative power of the divine. Rogers describes the techniques he utilized in a number of youth theater and storytelling workshops as part of an innovative and experimental pilot program sponsored by the Narrative Pedagogies Project; this book represents the practical and theoretical conclusions Rogers developed out of that work. As Rogers writes, “the drama program hoped that the teens would find God – that within the tangle of plotlines playing out in young people’s lives, the movements of God would be discerned, along with the sacred story God aches to craft within the stories of our lives” (2). Rogers’ improvisational theater and writing exercises probed participants’ “subterranean concerns,” encouraging each young person to identify a particular crisis (of faith, family system, or personal identity) and articulate both the crisis and its potential for resolution through movement, voice, and narrative.

Rogers is an impassioned champion for the power of narrative; for him, story “has the ability to reveal the most vital longings that pulsate in people’s lives and souls, to communicate the cherished wisdom of our religious and cultural communities, to foster reflection on how the narratives of our lives intermingle with the narratives that ground our faith, and to inspire people to journey toward hope as empowered agents of healing in our world” (2). As a book on narrative, each chapter begins decorously with a story-like recounting of an episode from the author’s experience with teens. These stories, which are often quite touching, serve to anchor the theoretical discussion that follows in the actual practice of storytelling, such that the reader’s overall impression of the book is one of overlapping layers: stories from Rogers’ own experiences envelop his theoretical and practical arguments with lively efficiency. This “first narrative, then theory” structure works well for the book, although some narratives serve as more effective introduction points than others.

The first chapter, “How do stories transmit a faith tradition? Narrative pedagogy and religious literacy,” begins with a deeply moving account of a youth stage production of an original play about the narratives of key figures in African American cultural history. Titled, “Freedom Train,” this production gave African American youth the opportunity to honor a retiring pastor by crafting a dramatic narrative that intimately connected their church and the anxieties of twenty-first century youth to the great “wisdom speakers” and sacred stories of Civil Rights history. Here Rogers argues convincingly that “stories are an unusually effective way to communicate a religious heritage” (34), for the very process of identity construction within a faith community is itself immersed in sacred narratives that claim unique transformative potential and institutional authority. Religious institutions are themselves constituted by narrative, for the story of a particular community of faith both shapes and conditions the experience of participants – a complex process that Rogers glosses over by simply noting that “communities are stories,” for a “faith tradition is not known when its theological doctrines can be articulated, nor when its ethical precepts can be distilled” (37), but rather when its “canonical stories” are so absorbed that they become the foundation of religious identity. Here Rogers makes something of a jump; he seems to say that a faith tradition is unintelligible except through narrative (a point that may run counter to the experience of the more systematically-minded theologians among Rogers’ reading audience). Nevertheless, Rogers’ main thesis in this chapter – that young people must be invited to interact creatively with the narratives of their tradition to make them their own – is a course well-taken (although perhaps well-traveled).

The second chapter tackles the question of the influence of narrative in the crafting of personal identity. Rogers’ theoretical analysis is particularly astute here; his interlocutors range from narrative theologians Stanley Hauerwas and George Stroup to (somewhat controversial) child psychologist Richard Gardner. Here Rogers points with great nuance and practical clarity to the liberative potential of Christian narrative for young people, advocating for an approach that helps adolescents and young adults to “find their place” within the narratives of their religious tradition by using storytelling to discern, claim and articulate personal identity.

Rogers’ third chapter attempts to articulate how narrative may stimulate the contemplative dimension of youth spirituality, but here the result seems focused more on the potential of psycho-drama as a tool best suited for accessing deep emotive expression rather than contemplation per se. It is in this chapter that Rogers tackles questions of human suffering, using Bibliodrama and creative, physical dramatic gestures to access young people’s frustrations with the silence of God and the inadequacies of religion. For Rogers, “[t]he liminal space of the imagination is where the sacred resides” (81), and the author’s description of a moving and powerful experience with teens who crafted a narrative that challenges God in the face of suffering is impressive proof that psycho-narratives which articulate young people’s frustration can have the potential to introduce hope, simply by creating space enough for young people to be heard. But is this truly contemplation? Rogers asserts that “contemplative encounter narrative pedagogy facilitates an existential experience of the underlying realities embedded within a sacred story” (81), yet the techniques and examples offered here inhere more to a kind of narrative approach to naming points of existential struggle rather than a contemplative program for encountering the divine per se. In particular, the use of narrative seems slightly at odds with the emphasis often placed in the Christian tradition on the apophatic or wordless quality of contemplative (or “mystical”) encounter. Nevertheless, there is great potential here for helping young people to imaginatively access the emotional depths of existential crisis and to move beyond points of despair in a hopeful, transformative way.

The fourth chapter gives a particularly engaging account of the ways in which narrative may be used to engage young people’s critical consciousness. Here Rogers’ narrative-theoretical approach truly shines: the chapter opens with a description of “Terrorists in Heaven,” a production in which young people dramatically envisioned an afterlife that brings together figures from Islam and Christianity and explores the humanity common to both. Rogers then moves to an insightful discussion of the theoretical and practical mechanisms for using storytelling to help young people excavate and understand the layers of unwitting enculturation into which they have been submerged by society. Rogers’ acknowledgement that “cultural and religious narratives often enculturate in oppressive and destructive ways” (109) sets the stage for insightful, practical suggestions for helping young people to deconstruct toxic ideologies, assumptions, and subliminal religious and cultural messages.

The use of narrative to embolden what Rogers calls “creative vitality” in young people forms the focus of the fifth chapter. Here Rogers is at his most poetic and theological: the chapter can hardly contain the author’s wonder and thanksgiving for human creative potential, crafted in the image of God as Creator. The author’s passionate advocacy for narrative’s potential as an art form that transforms both its performers and audience bursts with exuberant clarity from every page. For Rogers, storytelling’s power is precisely in its potential to help its participants come alive to their own experiences, so that they may engage the process of meaning-making and thus take greater ownership in the crafting of unique self-expression and individual personhood. Even general educators will find the fifth chapter’s emphasis on the art of storytelling accessible, and Rogers’ practical suggestions for crafting narratives for a “storytelling event” promise useful potential for youth leaders of any religious tradition.

The sixth chapter demonstrates the ways in which stories have the power to inspire youth to work for social change. Rogers grounds his pedagogical discussion at the intersection of liberation theology, Paulo Friere’s liberatory philosophy of education, and Augusto Boal’s Theater of the Oppressed. Specific practical suggestions for dramatic “warm-up” exercises for a youth group come directly from the traditions of improvisational theater; narrative exercises that explore space, story, and gesture are heavily indebted to Boal. Precise mechanisms for helping students transition from narratives of societal transformation in a workshop or theater setting to taking initiative as agents of actual change in the world are left to the imagination of the reader.

Throughout the book, Rogers’ prose demonstrates the craft of a lively storyteller; it is bold and even, at times, rhapsodic, although not without a few accidental missteps. For example, a young adolescent with special needs is described as having a “Pillsbury doughboy physique” and as “bobbing” his head in rhythm to his steps “like a bobblehead doll” – an unintentionally cruel set of descriptors that, while vivid, relegate this individual boy’s particular disabilities or developmental issues to the realm of disposable cultural tropes. Overall, Rogers excels in relating with dramatic immediacy the personal experiences of a racially and ethnically diverse group of young people; indeed, one of the book’s key strengths is in the diversity of cultural narratives that it sets forth as examples.

Each chapter concludes with five “educational movements” that clearly articulate the goals and processes of Rogers’ narrative pedagogy. The book therefore steers deftly between rigorous theoretical exposition and extremely practical suggestions for concrete exercises without becoming too theory-heavy or assuming an unreasonable level of access to specific resources. Although Christian youth ministers would be the most obvious reading audience, the book will benefit anyone who works with adolescents and young adults or who shares in the responsibility of helping young people to grow into mature, healthy, spiritually-connected adults (and in this sense, it may stimulate the interest of Sunday School personnel, church councils and vestries, and senior pastors, rectors, elders and presbyters in addition to youth ministry staff). In particular, the specific techniques and practices described at the conclusion of every chapter have the potential to benefit youth workers from a variety of institutional settings; therapists, pastoral counselors, and workshop leaders will find much food for thought and many suggestions for productive group work and creative exercises.